The horn of the unicorn

Like mermaids and dragons, unicorns are among the world's most famous mythical creatures. From artistic depictions to medieval tapestries, posters and children's T-shirts, unicorns are universally beloved. We all recognize the striking image, but the story behind the magnificent beast is equally enchanting.

The unicorn was not born entirely out of the popular imagination. It has evolved gradually from many early sources. The earliest reports of the unicorn date back to the fourth century, when the Greek physician Ctesias recorded exotic tales he had heard from travelers: "There are some wild donkeys in India. Their bodies are white, their heads dark red and their eyes dark blue. They have a horn on their foreheads about a foot and a half long." The horn, he adds, is white, red and black.

Unicorns, like mermaids, were long believed to be real. Both were based on legends and stories of travelers to faraway places. Unicorns have a rich history that has been discussed by such luminaries as Aristotle, Julius Caesar and Marco Polo. Belief in unicorns increased with the invention of printing and the distribution of the Bible. It mentions the creatures at least seven times in the Old Testament.

What is the significance of the horn on the unicorns forehead?

According to legends, the unicorn is an animal that actually existed in ancient times. Taking the form of a white horse with a horn on its forehead, this animal both fascinates and intrigues. This makes it a mythological animal with a very special history.

Legends, myths and folklore systems of the Western world mention legendary horned creatures that are collectively known as unicorns. In heraldry, the unicorn is the symbol of the nation of its birth, Scotland, because this "proud and haughty beast" would rather die than be captured. Scottish soldiers fight to remain sovereign and undefeated. While much has been written about the mythological creature itself, less has been written about its horn, about which there is an entire mythological system.

Simply put, it is a beast with a single horn protruding from its forehead. In Europe, this "beast" is usually depicted as a white horse with a beard and horn similar to that of a goat. It was the protector of the forest in which it lived and the vitality of this forest was linked to this creature. In folklore, the unicorn horn, also known as the alicorn, was attributed with various healing properties.

So, yes, the horn was important to humans. But why did unicorns possess it - what was its purpose for the animal? The answer - we don't know, because the animal is for many people probably purely fictional. What we can do is dive into our knowledge of nature and try to find animals that have similar characteristics to unicorns and figure out why they have horns.

Even in today's video games, the unicorn horn can be considered a rare item with immeasurable magical powers. The idea of lending powers to this horn is not new. In fact, one of the reasons unicorns may have disappeared (considering they once actually existed) is that they were hunted for their horns. Currently, this is the case with elephants and rhinos in Africa. In the Middle Ages, unicorn horns were highly prized by evil characters. Since, according to them, they are sources of vitality and wisdom. According to the elders, the horn of the unicorn is unique and not only serves as a defense for the animal. Unlike a goat or other animals that have a horn. It is mainly used to protect its surroundings and environment. According to European cultures of the sixteenth, eighteenth and nineteenth centuries, the unicorn horn has therapeutic virtues. According to the works of these periods, which recount all the knowledge about this mythical animal, the horn is made of a substance called alicorn.


The horn was worth much more than gold.

It is this rarity that makes this unique horn highly sought after and in high demand. According to stories passed down from generation to generation, unicorns were therefore hunted for this horn. There was a time when hunters managed to obtain these treasures. They sold them to royal families. According to history, a horn was worth much more than gold. It was said to be worth 11 times more than gold. Although it was later proved that they were only narwhal horns. 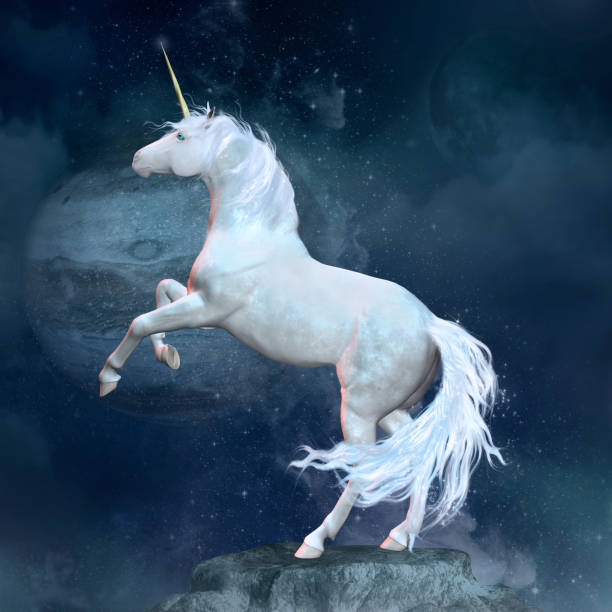 In most myths and folk traditions, the unicorn's power is concentrated in its horn, which is believed to immediately remove poisons as soon as its tip touches a liquid. Unicorns were often symbolically represented by rivers, lakes, springs and fountains.

The unicorn's power to purify water was detailed in a 14th century interpretation of the Physiologus. In a large lake where animals gathered to drink, a snake poisoned the water, but a unicorn made the sign of the cross with its horn so that the poison became harmless and the animals could drink safely.

Mythologists debate the archetypes buried in this myth, but it is generally accepted that the serpent represents the devil and the unicorn represents Christ, the savior and redeemer. The magic of the unicorn horn, whose origins go back to the purification of water, was later developed as a universal medicinal antidote.

Over time, in addition to taking care of contaminated water, unicorn horns have been perceived to have powerful healing properties as antidotes for viruses. This made them one of the most expensive remedies during the Renaissance. Therefore, it was widely used in royal courts. In Odell Shepard's 1930s book, The Lore of the Unicorn, he states that unicorn horns were also known in the Middle Ages as alicorns.


How did one obtain the horn back then?
Considered one of the most valuable spiritual possessions a king could own, unicorns could be purchased in apothecaries until the 18th century and were commonly found displayed in cabinets. Alchemists working for royal families and nobles used unicorns. The latter was mainly used in their production of medicinal plants.


The dosage at the time
Unicorn horn was most often infused and ingested to combat the symptoms of fever and pain. Parisian monks gave it to lepers to help heal their wounds and it was prescribed to nobles and kings to combat the plague and neutralize the venom of scorpions or vipers.


Immediate effects
It is probably for a small fortune that members of the royal family paid for these rare objects. Which triggered their placebo effect and caused some of the reported cases of healing. In the 12th century, the medical and scientific writings of Abbess Hildegard of Bingen recommended an ointment for leprosy based on unicorn liver and egg yolk. The writings said that wearing a "unicorn leather belt" protected a person from plague and fevers, and claimed that "unicorn leather shoes" kept diseases away from the feet.


Experimental method
Many renowned medieval authors have devoted entire works to the medicinal properties of unicorn horn. One of them is Andrea Bacci's 1573 Treatise on the Unicorn, its wonderful properties and its use. And the famous French surgeon Ambroise Paré, in his 1580 Discourse on the Unicorn, marked what some historians consider the beginnings of the experimental method.


The first mentions of the magic of a unicorn's horn
The first mention of a unicorn horn was described by Ctesias, a Greek physician and historian of the 5th century BC. He believed that unicorns lived in India and that their horns were magical objects. Indian princes used them "to make fists against poison."

The stories of Ctesias later inspired the writings of Aristotle, Pliny the Elder and Claudius Aelianus. All spoke words about the effect of the horn to protect against diseases and poisons. These writings influenced writers from the Middle Ages to the Renaissance, who regarded these creatures as real. But all that stopped in the 18th century, when sailors discovered the elongated tooth of the narwhal. The unicorn became symbolically associated with virginity and became the symbol of God's incarnation, innocence and divine power on Earth. In royal circles, unicorn horns were considered very sacred relics. They were usually mounted on silver pedestals (the short base for a pedestal, sculpture or column) and presented as trophies.

In Historical Resources
They also appear in several historical resources, including the Council of Trent in 1563, Saint-Denis Cathedral in Paris, and Westminster Abbey in London. Pope Clement VII presented a unicorn horn "two cubits long to King Francis I of France" at his niece's wedding in 1533 and Grand Inquisitor Torquemada noted that he "always used his unicorn horn to protect himself from poison and assassins."


It's a big deal.
In 1587, French physician Ambroise Paré explained that horns were used "at the court of the King of France to detect the presence of poison in food and drink." It was said that if the horn was heated and began to smoke, the dish was poisoned.


Scepters and sacred objects
Royal houses created scepters and other sacred objects from unicorn horns, such as the imperial scepter and crown of the Austrian Empire, the scabbard and hilt of Charles the Bold's sword. A rare, twisted unicorn horn, known as a "horn," was gifted to Charlemagne by the Caliph of Baghdad, Harun al-Rashid, in 807 AD and is on display in the National Museum of the Middle Ages.